I have visited South Africa many times in the past, but my most recent trip, just last month, in August 2016, has undoubtedly given me a wonderful experience that no previous visit allowed me.

Columba Leadership is on a mission, and that mission is to give young people from disadvantaged backgrounds in South Africa the opportunity to find their own inner strengths and character, to find their voice, and in doing so to develop the skills and the confidence they need in order to become productive citizens of their country. It is a noble vision and a highly pragmatic mission that has already produced almost 4000 graduates of the programme (of whom, incredibly, around 750 are educators who have taken the brave step of joining their students on the Columba adventure). The programme has also sought to create, with no little success, a powerful multiplier effect that has enabled those 4000 graduates to extend the impact of the programme to some 70,000 learners across the expanding list of high schools in South Africa involved with Columba Leadership. It is an organization based on the precepts of Columba 1400, the Scottish social enterprise founded by Norman Drummond, and whose core and abiding purpose is a simple one:

“….to help young people realise that they already have the inner greatness and confidence to transform their own lives and those around them.”

It is a mission that I had the privilege to witness at first hand when I visited one of the schools working with Columba Leadership – Oval North High School, in Cape Town – and to sit with and speak to eight astonishing young people who had completed the programme. Why astonishing? Because for an awe-inspiring morning I was able to have a conversation with eight of the most articulate, confident, intelligent, thoughtful and natural young people that I have ever met! I was able to see and hear and converse with eight highly impressive products of the Columba Leadership programme. All of these young people are now working hard in their school and in their local community to broaden the impact of their own learnings by extending their reach to their fellow school students.

Columba Leadership works in partnership with high schools across South Africa to select groups of young people to take through their programme of development. Students are selected not on any  measures of school achievement or on the basis of previous behaviours, but on the basis of an essay that each student writes explaining why they wish to join the programme. Columba insists on selecting a mix of ‘good’ students and those whose school careers have been less than successful to that point. They make a point of choosing young people who have perhaps been in trouble in various ways in the past.

I visited South Africa for 10 days in August at the invitation of Rob Taylor, Founder and Chairman of Columba Leadership, to deliver a keynote address to their annual meeting of sponsors and partners. I got to know Rob and the organization when I carried out some research for the Maitri Trust in late 2013 / early 2014 into the state of teacher education across the developing world. The Maitri Trust is a sponsor of Columba Leadership and I was able to glean some interesting and thought-provoking ideas from Rob over a number of conversations at the time.

During my visit to South Africa, I was able to spend time at Oval North High School and I had the opportunity to speak with Glen van Harte, Director of the Metro South Education District (within which Oval North sits), and a group of school principals and officials from across the district. 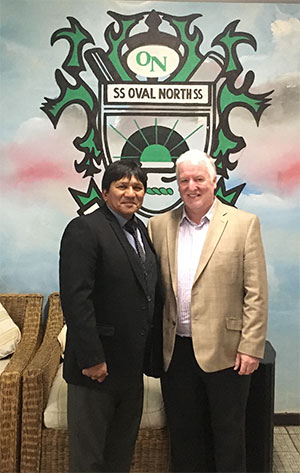 We were met in Oval North by Mr Kassiem, the school’s ebulliant principal, and I was given the honour of speaking to an assembly of the whole school community: all 1200 students and every teacher. I then had the privilege of meeting eight of the young people participating in the Columba Leadership programme. Each of them told me their story. I listened to their recollections of life before Columba, of who they were and where they thought they were going in life, of their impressions of the programme, of their newly found hopes and dreams for the future. They also spoke of what they wanted to give back – were already giving back – to the community around them. Not one of the young people displayed any egotism but all of them expressed a quiet pride in what they had achieved in terms of their own development and in terms of what their achievements were enabling them to do for others. In amongst the articulacy and thoughtfulness and intelligence of each of these young people, I was able to detect a naturalness and a quiet sense of their own worth that was immensely refreshing to behold.

Two members of staff who had also participated in the Columba Leadership programme were in the room too. I was able to listen to two adults who felt no need to  exhibit any of the signs of status and authority that so many teachers in my experience feel the need to display in the presence of students. They spoke as equals with the young people and they were clearly hugely impressed by what they had seen and experienced on the programme. 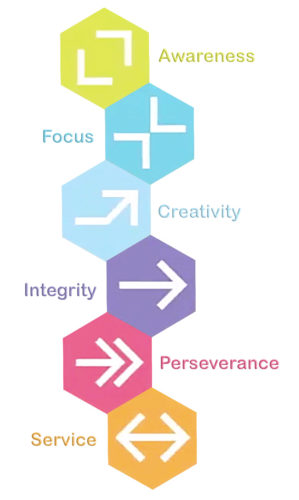 The central principle of Columba seems to be that it is not for anyone else to tell a young person or a educator what kind of person they should be. Instead, the programme is designed to enable every participant to discover who they are for themselves, to find their own inner worth and their own strength of character, and to then give them the means by which they can begin to express that character and that worth, both for themselves and, more importantly, for others around them. The impressive thing about this is that the actual Columba programme is just 6 days long in terms of the training programme itself! In those 6 days, the young people are given the space, the trust and the mental and emotional tools to discover for themselves the importance of six critical leadership traits: Awareness, Focus, Creativity, Integrity, Perseverance and Service. Of course the young people then use what they have learned about themselves over an extended period of time to put their new-found knowledge, skills and capacities into practice. 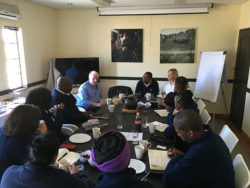 A few days after my visit to Oval North I had the chance to meet with Columba’s group of managers at their headquarters in Johannesburg, the people who organize and run the programmes for participants, led by Tracy Hackland, CEO of Columba Leadership. Every single one had a different story to tell about where they had come from and what they wanted to achieve through their work with Columba. Every single one of them had come to Columba by a different career path and I was able see the value and the strength offered to Columba by their diversity.

From Rob and Tracy at the helm of Columba, through their impressive Communications Officer, Karselle Moodley (who made sure that every aspect of my trip ran smoothly), to the amazing group of managers and all the staff at their HQ, I found myself amongst one of the most committed, professional and visionary groups of people I have ever had the pleasure of meeting and working with.

And I even had the opportunity to see the Big 5 and more in the space of 36 hours spent at the wonderful Londolozi Game Reserve bordering the Kruger National Park. While there, I was able to speak with Dave Varty, owner of the reserve, who, along with Kate Groch of the Good Work Foundation, have set up, amongst many other efforts, a Digital Learning Centre in Londolozi for use by the rural community in the area. The desire to do good things for others, the wish to give back to the community, is undoubtedly one of the most impressive traits evident in South African society today. It is a national trait that will serve the country well into the future.

I intend to write further and in greater detail of my impressions gained during the ten days I spent in South Africa, but I will leave the last word for the moment to Rosey Seima, who along with a number of other Columba Graduates has founded an organization MIC (Making Incredible Change). In a poised and heartfelt TEDx talk at Westerford High School in South Africa, Rosey said:

“Our mission statement [of MIC] is to instill the mental capacity of the youth with values and knowledge needed to bring change in our community, city, province, country, continent and the world.”

Columba Leadership has given Rosey and many thousands of other young people across South Africa the knowledge of their own true self-worth and the capacity to take that knowledge out into the world in order to make our world a better place in which to live. For all of us.