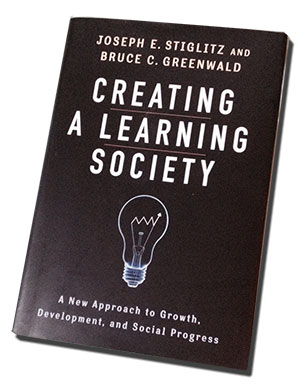 The printing press sowed the seeds of social and economic progress, heralding a time when ‘change itself [became] the archetypal norm of social life’ (McLuhan). It then took another three centuries and more before the philosophers of the Scottish Enlightenment were able to reframe the concept of progress as no longer merely change-as-happenstance but rather as a conscious effort to transform society for the better. Change was no longer merely possible but desirable. Along with the notion of progress as positive transformation, the Scottish philosophers also propounded the notions of meritocracy and of our right to question authority. Out of these Enlightenment values came the possibility of imagining and creating a learning society, a society that recognised not simply the importance of learning what is and has been, but of what could be and what might be desirable. A learning society is a society that wants to learn how to learn, that respects science and that recognizes the need to question authority, and according to Joseph Stiglitz and Bruce Greenwald in their new and important book – Creating a Learning Society: A New Approach to Growth, Development, and Social Progress – it is the basis for much of the economic growth that has occurred across the world since the late 18th century.

Stiglitz and Greenwald have produced a book that is primarily about economics. But it is also a book about education – not surprising, given its title. It is a book filled with detailed and specialized economic theory and analysis, but it is also a book that offers much to those whose primary interest is in the nature and importance of learning. As an educationist, I am interested in the possibility that this might well be the first book I have come across in more than three decades in the field that attempts to show how education is the single most important explanatory factor we have to consider in trying to understand the nature of economic growth and social progress globally.

The authors take as their starting point an approach to learning that comes out of microeconomics, one that relates primarily to improvements in a firm’s productivity and efficiency. But they take pains to make clear that they relate the kind of learning that goes on in the firm directly to the learning needs of the wider society too. Of particular interest to me, however, is that Stiglitz and Greenwald don’t talk about learning in the abstract, as if we all agree what learning is, and just leave it that. Instead, they promote a form of learning – one they believe is most fruitful for growth and prosperity in  a country – that is not the rote learning of the past, or even the dry academic learning that might happen in some elite institutions around the world and is being championed once again by some national governments:

Much of traditional economics focuses on education’s role in increasing human capital, the stock of knowledge embodied in individuals. It is typically measured by years of schooling. Our emphasis is quite different. Years spent on rote learning might (or might not) increase the stock of (even relevant) knowledge and, in that sense, increase productivity, at least temporarily, until that knowledge becomes obsolete. But such schooling would not necessarily increase the ability to learn – increasing capacities for lifelong learning – and could actually impede it, especially if, as part of such education, there is an attempt to inculcate ideas that are antithetical to science.

The authors believe that the Enlightenment represented a change in mindsets, to those that were receptive to the creation of a learning society and which, at the same time, offered a basis for scientific enquiry. Alongside this, ideas of human rights and democracy became natural bedfellows. They promote the idea that a more open society:

…generates more ideas, a flow of ‘mutations’ which provides not only excitement but the possibility of dynamic evolution

Stiglitz gave a very clear exposition of his ideas to the RSA in Scotland earlier this year and was happy to point to Scotland as a country that is actively seeking to create a learning society, one in which university education for instance is still free to all its citizens, and one that understands the benefits of striving to minimise inequalities in society while at the same time ensuring that rational thought and scientific enquiry will continue to trump the anti-science rhetoric we are seeing increasingly and worryingly in other, larger, advanced economies.

I sense that this could be an important book, and just as important to educational debate as it will be to economic thinking. The description of learning in the book is broad-brush but it is always thoughtful and always challenging. Its starting point in microeconomics will limit the willingness of some in education to take it seriously – that would be a mistake! I welcome the authors’ focus on a kind of learning that goes beyond rote learning, beyond the kind of learning that I have typified in the past as ‘smokestack schooling’.

For what it is worth, I believe that the kind of learning they (rightly) denigrate is certainly no longer tenable in the Knowledge Economy of today, but it endures obstinately nonetheless, and it was deemed good enough, by the logic of the industrial economy,  for most people for most of the past two centuries and more, through most of the industrial era and into the final decades of the twentieth century. The point now is to take these lessons and to apply them to the advanced economies with renewed vigour, but also to those countries around the world that are still struggling to develop economically. The Asian tiger economies thrived precisely because they were able to pay little heed to the so-called Washington Consensus in the period since the Second World War, and precisely because they focused on education as central to their development strategies. Sub-Saharan Africa, remaining dependent, as it has done, on aid from the West, has not been able to focus on learning to the same extent.

If this book can tilt the balance towards changing that focus in the developing world, and if it can more generally emphasise the critical importance not only of learning, but of the right kind of learning, to social and economic progress across the world, then this book on economics really could become one of the most important books on education in recent years!