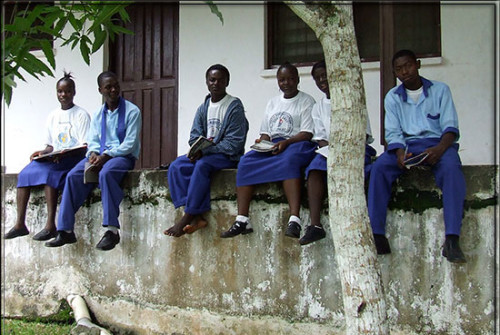 For as long as school has existed, the fundamental model of schooling has remained the same: scarcity of information and a paucity of means of access to that information led to the teacher being the chosen conduit of knowledge, with learners sitting passively at the feet of the learned to soak in knowledge. That the expected passivity on the part of learners has not always been forthcoming, and that there have always been courageous and enlightened teachers willing to subvert their ordained role, has often mitigated the worst effects of that model through the centuries but has only rarely overcome it. Today, as we shall see, this flaw in the model is becoming sharply accentuated by a rapid reordering of the means of access to knowledge by those who are not part of the elites, by those not in authority. It is a reordering brought about by the dramatic developments in the digital and networking technologies since the mid-1990s in particular.

Throughout history then, we all went to school to learn not what we ourselves might have wanted to learn or what we might have chosen to believe was important to learn but to be taught whichever truths and certainties, whichever character traits and behaviours, whichever skills, those who controlled our schools determined were right for us to assimilate. That is still the case. But things are changing, and the change is inexorable. The simple fact is that the elites are no longer sovereign over knowledge; they no longer control access to knowledge.

Schools around the world, and by association the education systems to which they belong, have rested on an illusory foundation for much of their existence. That foundation has been based on the assumption that the imparting of knowledge by the teacher somehow equates to, and leads directly to, the acquisition of knowledge by the learner. It is an entirely unprovable assumption. It is only when we begin to acknowledge this misapprehension that we are able to discern the pointlessness of so much of the rhetoric, so many of the structures, and so much of the policy-making and implementation carried out by those who lead schools today, at every level. And by questioning this assumption, we begin to question the concept of the school itself that has persisted for millennia in all its formations through the ages.

Human beings learn through their interaction with others, with ideas, with information, with the world at large. Ultimately we construct our own knowledge; we make our own connections between fields, ideas, concepts and information sources; we discern patterns; we generate metaphors that allow us to apply our learning in other spheres; we create and shape our own learning, all within the context of what we already know, however defective or incomplete that knowledge might be.

To conclude from this, however, that the role of the teacher in the school is superfluous would also be completely wrong. In fact, the opposite is true. Rather than compromise the role of, and need for, the teacher, a recognition of the underlying realities of the school will actually serve to transform and enhance the role of the teacher far beyond that which has been the basis of most formal education systems to date. For that to be true, however, there has to occur a wholesale inversion in our understanding of the act of teaching. The intervention of the teacher in the process can be critically important and valuable, but only if the teacher either consciously or intuitively understands the true nature of the relationship with the learner, namely that, at no point in the interaction of teacher and student does the learner in any simple sense ‘learn’ what the teacher ‘teaches’.  The best teachers have always instinctively known this. It certainly makes the role of the teacher a considerably more complex one than has been universally recognized since schools were founded. So while the learner’s increasingly ubiquitous access to information changes the core relationship with the teacher, it will never change the basic need of the learner to be helped on their way by someone who can bring knowledge and experience and wisdom to the learner by asking the apposite question,  by helping the learner to discriminate between useful and useless information, between partial and impartial information, or by guiding the learner into areas of knowledge previously unknown to them.

If we combine two issues – first, the fact that the central relationship that underpins the school, that between teacher and learner,  is now changing radically because of the learner’s equality of access to knowledge today, and secondly, the appreciation of the lack of a causal link between what is taught and what is learned and the inherent complexity of the process of learning – then we can look afresh at how these elements should cause us to re-think what role the teacher can play to greatest effect in the classroom and beyond the classroom.  When we place learning in the foreground rather than teaching, we begin to focus on the real and fundamental rationale for school and we begin to move away from the fetishized assumptions that have been accepted since those first schools were founded millennia ago. For one thing, we are able to  come to an understanding of school, historically, as an institution in which the learning that has occurred has been far less contingent on any teaching that took place within the school’s walls and more on the fact that, as human beings, we naturally  and ultimately learn for and by ourselves, though in interaction with others, with ideas and with existing knowledge. And for another, we can see that each of us needs to be aware of the historical, ideological and pedagogical reality underpinning school so that we can begin to reflect on how we might cast off the centuries of ‘false consciousness’ that schooling has inflicted on us.

I am working on a book that will attempt to unravel all of the issues and questions raised by this train of thought: to focus on the true nature of learning, to try to understand how we can become autonomous, self-directed learners, to recognize the far-reaching and expanding implications of the irrevocable shift in the relationship between teacher and learner, to seek an understanding of the implications of all of this for the changing shape of the school itself (which includes, by association, the college and the university), and to confront the complex superstructures of curricula, assessment, accreditation, teacher education and professional development, a distorting hall of mirrors that has been raised to support teacher-led education systems around the world. The book aims to offer guidance to every learner, every student, young or old, in how to extricate themselves from this gratuitous morass and begin to take control over their own learning. Learners need to realise, basically, that they have always had that control over their learning – they just weren’t given much if any scope by the accepted model of schooling to find it out. This book advocates a shift in the true locus of control from the teacher, and therefore from whichever elite or authority runs the schools, to the learner; at the same time, that shift will liberate the teacher from the fetishized and fallacious role that has been expected of them since the earliest schools were established.

Today, those teachers able see the way the wind is blowing can do so much to help their students, the learners, to grasp the need to take control of their own learning. Teaching is a noble calling when the teacher knows the truth that underpins the teacher-learner relationship and does not resort to a narrow practice that raises the teaching of a curriculum fabricated by those in power above the learning that students want and determine ultimately for themselves. The true teacher knows there has to be a framework in which the learner is able to take more and more responsibility for their own learning as they mature. The true teacher needs to know how to work with students in an open, collaborative way, in which the teaching and learning that occurs is the result of a continual process of open negotiation, and in which that process of negotiation enables the learner to grow and mature and, gradually, come to understand that they need not always be dependent on an education that is spoon-fed to them. The best teachers will help learners take control of their own learning, in other words. Teachers need to be freed to do what they do best: to bring wisdom and experience to bear, to call upon their subject matter expertise to guide the learner to ask the right questions and to introduce the learner to new areas of knowledge, to work with the learner to help them get the best out of their own efforts, to advise, to counsel, to cajole, to persuade, to direct when necessary, and, yes, occasionally to impart information (to instruct) where required and where it is wanted.

There is little nobility in those who have chosen through the centuries to collude with the elite, those who have been, and are, happy to take on the honoured status of ‘teacher’ but who demean that proud title by choosing to serve the narrow interests of a self-serving establishment, wherever that is and in whatever form it takes. Those who believe that the interests of a dominant authority, or of any external authority for that matter, whether earth-bound or metaphysical, coincide with the interests of the people, and who instruct in schools, colleges and universities on that basis, do nothing to deserve the respected title of teacher. Teachers should promote learning, not indoctrination.

Today, the greatest respect that teachers can pay their students is to say: we are all learners now, let’s learn together. My book will give all learners, and all true teachers, that respect.