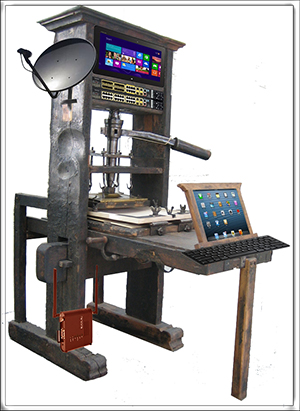 So says The Economist this week in an excellent piece showing just how long we have had to listen to the oft-heard announcements of the terminal decline of written English…..since at least 1387! In that year, Ranulph Higden, a Benedictine monk bemoaned the influx of words from Norman French, Anglo-Saxon and Danish. We know today that it is precisely that receptive porousness of English that has made it such a powerfully expressive language and that, imperialist history aside, has probably contributed much to the explosion of Englishes across the globe today.

Those who continue in this fine tradition of pointless doomsaying have a target to aim at that their predecessors never had: the relentless rise and rise of the Internet has given them a shifting, frightening (to some) communication landscape to really worry about! (These are the kind of people who might also have winced at the perfectly acceptable split infinitive I just used.)

But even today, these emissaries of linguistic Armageddon have no more reason to be alarmist than their six centuries of antecedents. They and their ilk have always simply been scared of change. Language is constantly changing – one that doesn’t change becomes a dead language very quickly. And alongside language, all of the other modes of expression and communication we have available to us are changing too, especially in this digital age. The doomsayers will tell us that the explosion in the use of video, images and other means of communication must be detrimental to the status of language, to the read and written words. The truth of course is that the rise of the visual and the growing articulation of multimedia and transmedia modes of communication do not replace language; instead they add a rich set of non-linguistic vocabularies to our ability to express ideas and to communicate meaning.

As Ron Burnett has written;

Language, verbal and written is at the core of what humans do everyday. But, language has always been very supple, capable of incorporating not only new words, but also new modalities of expression. Music for example became a formalized notational system through the adaptation and incorporation of some of the principles of language. Films use narrative, but then move beyond conventional language structure into a hybrid of voice, speech, sounds and images.

Some have spoken of this as a shift towards postliteracy. Definitions abound, but one I have quoted before comes from Janneke Adema, Research Fellow at Coventry University:

The Web has evolved from a text-based technology to one focused on graphic display and visual layout. Multimedia content largely privileges visual over verbal content.

Doug Johnson offered a similar view on his Blue Skunk blog a few years ago, defining the postliterate as:

…those who can read, but chose to meet their primary information and recreational needs through audio, video, graphics and gaming.

I basically agree with both of these definitions, with one important proviso. The Web has undoubtedly evolved from a text-based medium to one that is highly graphical and visual, but I would question whether the focus has really shifted from one to the other. I would contend that the focus, rather than having shifted, has been extended far beyond the bounds of textual expression to include all those other modes of expression or communication as well.

Text is still critically important on the Web as elsewhere, but we can concede that there are now very many other modes of expression and communication either complementing the text or vying with the text for our comprehension and interpretation. That the graphical and the visual are hugely significant on the Web is merely to state the obvious, but that the Web is also now, I believe, our key source and repository for text-based expression and communication, already beginning to supplant print media, is equally to state the obvious.

Doug Johnson, in the same post cited above also wrote:

…postliteracy may be a return to more natural forms of communication – speaking, storytelling, dialogue, debate, and dramatization.

So, the doomsayers can be ignored. Language is alive and well, and the written word and the read word are no less critical to human expression than they always have been. But in this postliterate era, we are able to enrich our verbal communication with an ever-growing plethora of visual, graphical, video, aural and a host of other means of articulating meaning.

Let’s celebrate our humanness in as many modes of expression as are available to us!