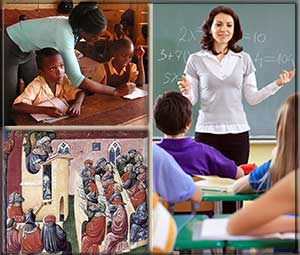 The limitless network of networks that we now inhabit, with its boundless stores of data and information, is quickly democratizing access to knowledge for everyone who has that essential connection to the Internet. This fact alone is already causing the pivotal relationship that has persisted at the heart of formal education since the dawn of history to shift in ways that complicate considerably the long-accepted notion of the school. The relationship in question is the one between the teacher and the learner. In the context of the historical model of the school laid out here, the relationship should be more accurately described perhaps as that between the one who teaches and those who are taught. The distinction is an important one on two counts: first, the status of the teacher as the fount of all wisdom, in the sense that has been the basis of schooling for so long, is now being radically undermined by the technologically-driven process of information democratization; secondly, the new reality is drawing attention, more clearly every day, to the abiding fallacy that has existed at the heart of education for too long, namely the simplistic belief that what is taught is what is learned.

When we accept the notion of the teacher as the fount of knowledge, as so many have done for so long, we ordain a particular relationship between teacher and student, between the teacher and the taught. It is a relationship in which the process of education is primarily one of somehow transplanting information from the head of the teacher, or from books and other media with the assistance of the teacher, into the head of the student. It is a relationship that, despite the centuries of thought and decades of research on learning theory, has always somewhat incongruously put teaching in the foreground rather than learning. Within the parameters of this relationship even the notion of improving learning has more often than not come down to questions of how teaching could be done better to enable students to learn more effectively. By placing teaching above learning, despite the fundamental truth that it is the learning, ultimately, that ought to be the whole point of education, we simultaneously establish a hierarchy in education and signify that the student can learn effectively only through the intervention of the teacher. By its very nature, then, it is a relationship that has tended over the centuries to elevate the idea of performance in teaching, to the extent that few teachers even today seem able – or willing – to see themselves in anything other than the traditional role of leading instruction and therefore at the centre of attention in the classroom. It is a relationship that has permitted the unquestioned acceptance of the unfairness, indeed the absurdity, of a teacher and a school taking credit for, and basking in the glory of, student success whilst simultaneously blaming student failure on the intellectual shortcomings, whether inborn or nurtured, of the students themselves.

The historical fixation on the centrality of the role of the teacher, as traditionally defined, within the school has, in addition, given succour to the erroneous and reductive assumption that what the teacher teaches is what the student learns. It is an assumption that has endured for so long in so much of the writing, thinking, discussion and practice pertaining to schooling through the ages that it is rarely if ever questioned. We go to school to learn that which is taught to us. That is what school is for, after all. But of course it is wrong. It is the central delusion of schooling, a myth that needs to be questioned and crushed if we are to move on from the model of education that has been with us for so long.

Schools around the world, and by logical association the education systems to which they belong, have rested on this illusory foundation for much of their existence. That foundation has been based on the assumption that the imparting of knowledge by the teacher somehow equates to, and leads directly to, the acquisition of knowledge by the learner. It is an entirely unprovable assumption. It is only when we begin to acknowledge this misapprehension that we are able to discern the pointlessness of so much of the rhetoric, so many of the structures, and so much of the policy-making and implementation carried out by those who lead schools today, at every level. And by questioning this assumption, we begin to question the concept of the school itself that has persisted for millennia in all its formations through the ages.

Human beings learn, as I noted previously, through their interaction with others, with ideas, with information, with the world at large. Ultimately we construct our own knowledge; we make our own connections between fields, ideas, concepts and information sources; we discern patterns; we generate metaphors that allow us to apply our learning in other spheres; we create and shape our own learning, all within the context of what we already know, however defective or incomplete that knowledge might be.

However, to assume from this that the role of the teacher in the school is superfluous would also be completely wrong. In fact, the opposite is true.

Rather than compromise the role of, and need for, a teacher, this recognition of the underlying realities of the school will actually serve to transform and enhance the role of the teacher far beyond that which has been the basis of most formal education systems to date. But for that to be true, there has to be a complete inversion in our understanding of what the act of teaching means. The intervention of the teacher in the process can be critically important and valuable, but only if the teacher either consciously or intuitively understands the true nature of the relationship with the learner, namely that, at no point in the interaction of teacher and student does the learner in any simple sense ‘learn’ what the teacher ‘teaches’.  The best teachers have always instinctively known this. It certainly makes the role of the teacher a considerably more complex one than has been universally recognized since schools were founded. And now the learner’s ubiquitous access to information changes the core relationship, but it will never change the basic need of the learner to be helped on their way by someone who can bring knowledge and experience and wisdom to the learner by asking the apposite question,  by helping the learner to discriminate between useful and useless information, between partial and impartial information, or by guiding the learner into areas of knowledge previously unknown to them.

If we combine the two issues raised above – first, the relationship between teacher and learner that is now changing radically because of the learner’s equality of access to knowledge today, and secondly, the appreciation of the lack of a causal link between what is taught and what is learned and the inherent complexity of the process of learning – then we can look afresh at how these elements should cause us to re-think what role the teacher can play to greatest effect in the classroom and beyond the classroom.  When we place learning in the foreground rather than teaching, we begin to focus on the real and fundamental rationale for school and we begin to move away from the fetishized assumptions that have been accepted since those first schools were founded millennia ago. 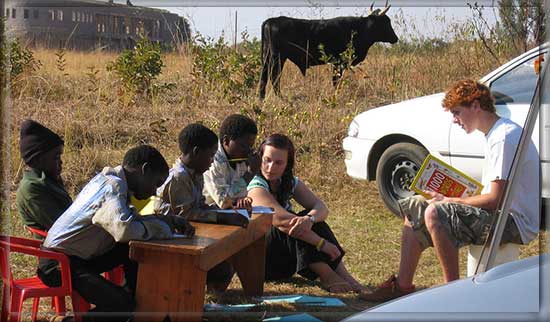