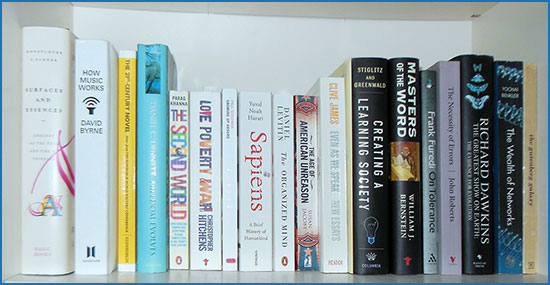 BBC Radio Four offers a number of fine programmes about books, writing and reading. I regularly enjoy A Good Read in which the host and two guests each specify a book that all three have to read and then comment on. It is a great antidote to anyone who doubts that literary taste is entirely subjective.

Open Book, hosted by Mariella Frostrup, is equally interesting, focusing mainly on interviews with authors, but ranging widely over the domain of books generally. A recent programme was entitled “Why We Read” and brought together four people for a discussion on the question: John Mullan (professor of English at UCL), Naomi Alderman (novelist and games designer), Damian Barr (writer, columnist and playwright), and Joe Devlin (neuroscientist).

I read a lot. However, I returned only recently to reading fiction after many years in which I devoured non-fiction almost exclusively across a broad swathe of subjects – education, technology, culture, politics, philosophy, literature, science, economics, and much more besides. My return to fiction is allowing me to enjoy again a number of books that I read many years ago, along with some recent fiction that is entirely new to me. But I still, and will continue to, read non-fiction, because of the pleasure it gives me and the learning it allows me.

So I was a little nonplussed by a few throwaway remarks by the otherwise erudite panel that equated non-fiction books with ‘facts’. You can listen to this particular part of the conversation in the 3 minute extract above.

In the discussion, Marcella Frostrup said:

It seems to be a common thing amongst more mature people…that you must amass facts, and eschew fiction…

Apart from the equation of facts and non-fiction, I wonder whether the comment about ‘mature people’ is even arguable? In my experience, young children devour ‘fact books’ more than any other age group.

Joe Devlin, as an incentive for readers of non-fiction to try fiction, offered the notion that:

…lots of fiction has interesting facts in it…

He said that he had read Wolf Hall and learned much about the Tudors, but had enjoyed it primarily for a narrative throughout which Hilary Mantel had cleverly woven many facts about that period in English history.

…lets you into consciouses like no other kind of book…

I can say categorically that I have almost never, at least not since I had to learn so-called facts for utterly pointless examinations at school and at university, read a piece of non-fiction in order to ‘amass facts’. Indeed I have a philosophical difficulty with the very notion of a ‘fact’. You show me a fact beyond the merely trivial and I will show you a piece of information that can be pulled apart and debated ad infinitum.

The preponderance of the non-fiction titles I buy and read engage me with argument, discourse, categorical statements to be debated, opinion and ideology. Indeed, many of them also offer a narrative, with an argument often built around the narrative or a number of intertwined narratives. It may not be quite the kind of narrative that I will find in a work of fiction; nonetheless, writers of non-fiction do often pull their readers in by presenting their thoughts through a story that weaves a series of connected people, events and ideas together.

As for access to ‘consciouses’, I could pick out dozens of non-fiction books from my shelf that lay bare the thought processes, the backgrounds, the prejudices, the hopes and fear and desires of the writers who penned them, and often of those who might be referenced in the work. Fiction, I know, manages this in ways that most non-fiction cannot, but it would be wrong to argue that only fiction is able to do this.

I will continue to buy and read non-fiction. I will continue to expand my re-kindled pleasure in fiction (literally, since I read much of my fiction on a Kindle). But I will very rarely if ever read anything merely to amass facts.